What Is Thought Leadership

Thought-Leadership is a business’s strategy to shape, promote, and own a topic of great societal relevance. A Thought-Leader’s central goal is to gain new interested customers and to create an active community of inspired brand fans. Though Leader works closely with their fans to achieve the ambitious goal they have set themselves.

With this strategy, a brand transforms from a simple market participant to a cultural institution – a Thought-Leader. However, Thought-Leadership is no end in itself. Only via consequent and sustainable implementation Thought Leaders achieve a measurable Business Impact, which can be proven by multiple economic indicators.

The gain of new customers and prospective buyers

Active recommendations and an increased willingness to do so

Increased loyalty and decreased vulnerability to a crisis

Cut of marketing and sales costs

Thought Leaders are authorities in the market

Businesses want to be the number one of many – Thought Leaders are unique. 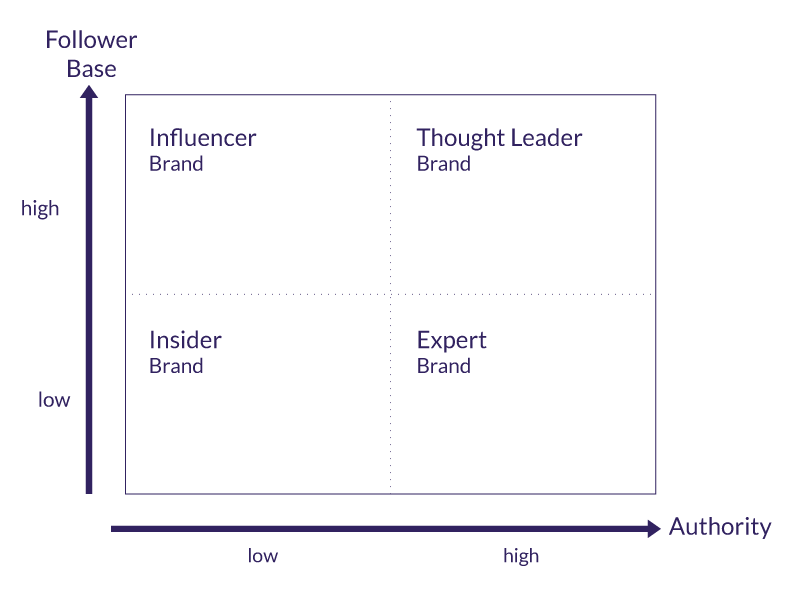 New recommendations and an increased willingness to do so by providing activities that matter to people. Turn customers into brand ambassadors with an active community building

Would you like to increase your sales sustainably and strengthen your brand?

Thought Leadership as a tool to position your brand and line functions: SIEMENS

Thought Leadership as a market strategy and business model: Hubspot

The Campaigner strategy focuses on communication and its content to occupy the role of the forward thinker in the market as well as in the target group. For this purpose, a media campaign is developed (Thought Leader Campaign), which does not only advertise the Big Idea and the brand’s approach to a solution, but simultaneously address the target group personally, inspire, and involve them. The target group has to engage themselves actively and use the communication tools provided by the brand (e.g. Facebook fan page, messaging board, etc.).

Focused Thought Leadership campaigns tie and activate the consumers as well as increase loyalty. They enable the customers to experience more than just the product: they can see and experience your key promise, your social impact, and be part of your legend.

The body care brand Dove (Unilever) has been successfully promoting the Big Idea of „Natural Beauty“ for many years now- consciously distancing itself from the traditional and artificial beauty image, heavily represented in fashion magazines and the fashion scene. Dove commissions its entire brand communication to its “Thought Leader Campaign,” and with viral campaigns, studies, different media formats (e.g. TV contest shows) keeps the momentum going and its customer’s enthusiasm high. This high enthusiasm motivates the customers to participate in Dove’s online community and promote the brand's concern: To encourage women’s self-esteem and self-awareness.
The companies own body care products, and the business model remains mostly unaffected by all of this.

Experiencing the Role of the Forward Thinker Through Thought Leader Products.

The Innovator focuses on the products and services of a brand (Thought-Leader Solution). The product itself, with its first impression, its function, and the user experience embodies the Big Idea. The product/services itself makes people want to be involved and joins them in a fan community.

With his innovative Thought Leader Product, the provider creates an entirely new market category or dominates the awareness in an already existing one. Prepared to perfection, the brand name will become a proper noun, a synonym for the entire market in the target group’s perception (e.g. Post-It for self-adhesive pieces of paper or Coke for a soft drink with caffeine).

TESLA Motors has worldwide acclaim for its innovative, luxurious, and user experience focused electric cars, which have redefined the entire perception of the electric vehicle network and, even further, have convincingly claimed to surpass the driving experience of conventional cars.
TESLA’s Big Idea has really come to light since they have begun mass producing batteries and superchargers. Closely related to the company’s name giver Nikola Tesla (1856-1943) the brand’s focus is to establish self-sufficiency in generating and storing energy.
With the introduction of the “Powerwall”, TESLA introduced an energy storage device which enables private households to essentially become self-sufficient. Nikola Tesla himself dedicated his research to precisely this idea. The Powerwall visualizes TESLA’s Big Idea for a target group that hasn’t yet been familiar with the brand and the legend behind it. The product itself is the Thought Leader Hero.

Every single part, as well as the entire integral system, communicate the Big Idea of the product and brand solely through their elegance and functionality. The brand’s function as a pioneer in the field is advanced via the product, the community, their platform, and, ideally, the brand's own communication campaign.

The system can also function as a community, for the consumers and fans, in itself, as WordPress (one of the most popular content management systems) perfectly exemplifies.

Apple is the prime example of Thought Leadership. No other company has internalized the concept like Apple has over the past decades. The company uses every available method of branding – be it the origin myth as a humble group of engineers working from a garage, the legend as a rebel by using the image of the original sin with the apple, or by incorporating unique designs – to remain a pioneer in their field.

Steve Jobs has forever established himself, even after his death, as the brand face of the company and the mastermind and pioneer of the industry. In cooperation with his legendary head of marketing Guy Kawasaki, he from early on involved every one of his employees in the company’s Thought Leadership campaign by the IT world with his legendary Thought Leadership Campaign “Think Different.” It was a simple idea: in their advertising campaign, Apple joined the ranks of other revolutionary Thought Leaders by putting their faces into Apple’s commercials (e.g. Albert Einstein, Martin Luther King jr., Richard Branson, Pablo Picasso, etc. this youtube clip explains the idea behind it perfectly Youtube video).

The natural conclusion, now, is that every great innovation, product, or service by Apple is combined into one single Thought-Leader System. Every product (iPhone, iPad, or Apple Watch), by itself, and combined communicate the brand’s leadership idea. They set the bar so high that with every new product the customers, the fans, and even the stock market expect a revolutionary new idea. Not fulfilling said expectations by “simply” introducing improvements to existing products leads to disappointed customers.

The launch of the Apple Watch is a good example of how difficult these expectations can make introducing new products. Since there already were similar devices on the market and Apple, as a Thought Leader, simply integrated it with its other products (hence delivering a smooth user experience), the reactions among Apple’s fan community were split.

We believe there are many more, and different ways, in the future for Apple to maintain their role as a Thought Leader and expand its campaign even further. A lot of market potential nowadays lies in developing ingenious appliances like smart TVs, new smartphones, tablets, or even cars. However, it can be just as exciting for the company to connect its entire community on its own, interconnected community platform. In times of Big Data, the most significant benefit for the customer can arise from their personal data, i.e. data they provide willingly, to use interactive Apple services.

A Brand Face Strategy converts your employees to Thought Leaders. The final Thought Leadership dimension is the Brand Face dimension. A brand face is much more than just a figurehead. They are the ones that radiate authority towards your customers. They influence the way your fans think and represent your brand as well as your brand’s entire philosophy.

There are five different types of brand faces that differ in regard to input, efficacy, and personalization. An ideal implementation of brand faces all of them would have their place in the company, however, this rarely is the case in practice. Especially when you are new to the concept and are just starting to implement them it is advisable to focus on one aspect at a time. Later changes in one aspect have to be adapted in all the other ones as well.

Even though the road to the right brand faces can be long and costly, their ROI is worth it.

Deutsche Bank is one of the most renowned banks in Germany. After the 2008 financial crisis, every banker and especially the ones working at Deutsche Bank were perceived as heartless.

A few years ago the executives at Deutsche Bank decided to establish their most senior investment strategist as their brand face. Ever since they publish a daily column on their website titled “perspectives in the morning,” which deals with current developments and outlooks in the German market as well as internationally.

Each column can be accessed via a mobile app or be received as an email. Dr. Ulrich Stephan Deutsche Bank’s head investor, acts as its patron, signing each of these columns as well as being portrayed on their banner. By that, Deutsche Bank has achieved to become more tangible and to show interest in the well-being of small investors. Dr. Stephan represents all the qualities Deutsche Bank wants to embody: Professionalism and know-how are displayed and combined to approach the everyday man. Thus, they create a connection and a positive association with the brand.

Thought Leadership – Use your position as an opinion leader strategically

Thought Leadership is a management strategy, which incorporates ideas, products, and business models to help you to achieve a real breakthrough. Any business, brand, and institution can become a Thought Leader – but only with the right strategy.